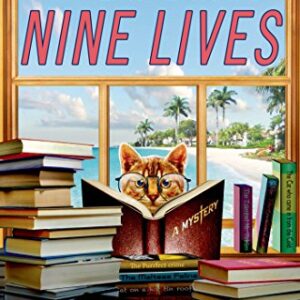 While driving along the beachside road that runs through the center of her hometown Dixie witnesses a terrible head-on collision. Ever the hero, she springs into action and pulls one of the drivers from his car just before it explodes in flames. A little shaken but none the worse for wear, Dixie proceeds to her local bookstore where she meets Cosmo, a fluffy, orange tomcat, and Mr. Hoskins, the store’s kind but strangely befuddled owner. The next day the driver whose life she saved claims that he is Dixie’s husband.

Meanwhile, both Cosmo and Mr. Hoskins have disappeared without a trace, and a mysterious phone call from a new client lures her to a crumbling, abandoned mansion on the outskirts of town. Soon Dixie finds herself locked in a riddle of deception, revenge, murder, and mystery.

The Cat Sitter's Nine Lives features a compelling main character and a riveting plot that is bound to satisfy the appetites of Dixie Hemingway fans and newcomers to the series.