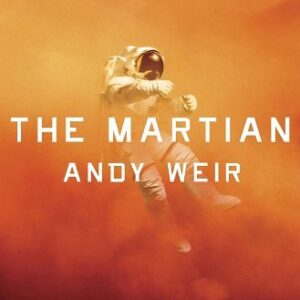 Product Description
Six days ago, astronaut Mark Watney became one of the first people to walk on Mars.

Now, he's sure he'll be the first person to die there.

After a dust storm nearly kills him and forces his crew to evacuate while thinking him dead, Mark finds himself stranded and completely alone with no way to even signal Earth that he’s alive—and even if he could get word out, his supplies would be gone long before a rescue could arrive.

Chances are, though, he won't have time to starve to death. The damaged machinery, unforgiving environment, or plain-old "human error" are much more likely to kill him first.

But Mark isn't ready to give up yet. Drawing on his ingenuity, his engineering skills—and a relentless, dogged refusal to quit—he steadfastly confronts one seemingly insurmountable obstacle after the next. Will his resourcefulness be enough to overcome the impossible odds against him?

8 Tips for Surviving on Mars from Andy Weir

So you want to live on Mars. Perhaps it’s the rugged terrain, beautiful scenery, or vast natural landscape that appeals to you. Or maybe you’re just a lunatic who wants to survive in a lifeless barren wasteland. Whatever your reasons, there are a few things you should know:

Mars’s atmospheric pressure is less than one percent of Earth’s. So basically, it’s nothing. Being on the surface of Mars is almost the same as being in deep space. You better bring a nice, sturdy container to hold air in. By the way, this will be your home forever. So try to make it as big as you can.

You probably plan to breathe during your stay, so you’ll need to have something in that pressure vessel. Fortunately, you can get this from Mars itself. The atmosphere is very thin, but it is present and it’s almost entirely carbon dioxide. There are lots of ways to strip the carbon off carbon dioxide and liberate the oxygen. You could have complex mechanical oxygenators or you could just grow some plants.

Earth’s liquid core gives it a magnetic field that protects us from most of the nasty crap the sun pukes out at us. Mars has no such luxury. All kinds of solar radiation gets to the surface. Unless you’re a fan of cancer, you’re going to want your accommodations to be radiation-shielded. The easiest way to do that is to bury your base in Martian sand and rocks. They’re not exactly in short supply, so you can just make the pile deeper and deeper until it’s blocking enough.

Again, Mars provides. The Curiosity probe recently discovered that Martian soil has quite a lot of ice in it. About 35 liters per cubic meter. All you need to do is scoop it up, heat it, and strain out the water. Once you have a good supply, a simple distillery will allow you to reuse it over and over.

All right, all right. Food is the one thing you need that can’t be found in abundance on Mars. You’ll have to grow it yourself. But you’re in luck, because Mars is actually a decent place for a greenhouse. The day/night cycle is almost identical to Earth’s, which Earth plants evolved to optimize for. And the total solar energy hitting the surface is enough for their needs.

But you can’t just grow plants on the freezing, near-vacuum surface. You’ll need a pressure container for them as well. And that one might have to be pretty big. Just think of how much food you eat in a year and imagine how much space it takes to grow it.

Hope you like potatoes. They’re the best calorie yield per land area.

However you set things up, it won’t be a self-contained system. Among other things, you’ll need to deal with heating your home and greenhouse. Mars’s average daily temperature is -50C (-58F), so it’ll be a continual energy drain to keep warm. Not to mention the other life support systems, most notably your oxygenator. And if you’re thinking your greenhouse will keep the atmosphere in balance, think again. A biosphere is far too risky on this scale.

8: You’re going to need a reason to be there.

Why go out of your way to risk your life? Do you want to study the planet itself? Start your own civilization? Exploit local resources for profit? Make a base with a big death ray so you can address the UN while wearing an ominous mask and demand ransom? Whatever your goal is, you better have it pretty well defined, and you better really mean it. Because in the end, Mars is a harsh, dangerous place and if something goes wrong you’ll have no hope of rescue. Whatever your reason is, it better be worth it.

Be the first to review “The Martian: A Novel” Cancel reply