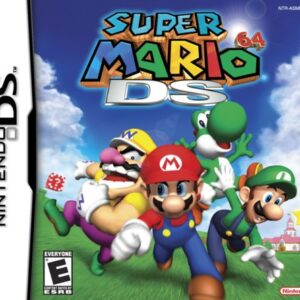 Nintendo 64's highly acclaimed 3D platform hit Super Mario 64 arrives on the Nintendo DS with all-new features that take full advantage of the new portable system's dual screens, touch screen and wireless multiplayer capability. New characters, stages and puzzles await players. In addition to Mario, players are able to play as Yoshi, Luigi and even Wario, each of whom has different abilities integral to collecting every last one of the 150 Power Stars hidden in the castle and grounds. Play through Adventure mode, engage in tons of new touch-sensitive mini-games or battle up to three friends in Wireless Versus mode, which you can play with only one DS Game Card. The top screen displays most of the principal action, while the bottom screen is used for mini-challenges, control functionality (such as analog stick emulation), and a map/radar screen for battles.

Be the first to review “Super Mario 64 DS” Cancel reply