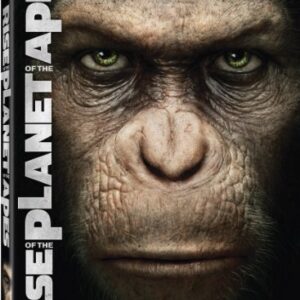 Product Description
Rise of the Planet of the Apes is a revolution; an action-packed epic featuring stunning visual effects and creatures unlike anything ever seen before. At the story's heart is Caesar (Andy Serkis), a chimpanzee who gains human-like intelligence and emotions from an experimental drug. Raised like a child by the drug's creator (James Franco), Caesar ultimately finds himself taken from the humans he loves and imprisoned. Seeking justice, Caesar assembles a simian army and escapes -- putting man and primate on a collision course that could change the planet forever.

Amazon.com
A galaxy's worth of nihilism buried under a '70s Velveeta topping, the Planet of the Apes series stands today as a dark marvel of pop cinema, a group of wildly variable films that combine to form a giant inescapable kiss-off to the human race. (That said message was able to withstand such distractions as ever-cheapening makeup and Charlton Heston loudly pounding sand makes its achievements even more impressive, really.) Boasting a keen awareness of its predecessors' particular charms and a gem of a central CGI performance by Andy Serkis, Rise of the Planet of the Apes makes for a rather miraculous summer movie: a big-budget special effects extravaganza that also delivers a killer backhand. Sort of redoing 1972's Conquest of the Planet of the Apes, the film follows the events set in motion when a bereaved scientist (James Franco) attempts to create a cure for Alzheimer's, resulting in a supernaturally intelligent chimp named Caesar. The old bit about science tampering in God's domain quickly applies. Director Rupert Wyatt (The Escapist) displays an admirable sense of pacing, deftly levying the escalating action scenes with small character moments from the likes of John Lithgow and Brian Cox. That said, the film belongs to Caesar, whose path from wide-eyed innocent to reluctant revolutionary generates the ironic pulp empathy that gave the original series such a kick. Watching the climactic confrontation on the Golden Gate Bridge, it's distressingly easy to figure out which side to root for. Chuck Heston would no doubt grit his teeth in approval. Note: Those skeptical that this revamp could wholly retain the original's doomy backbeat would do well to stick around during the end credits. --Andrew Wright