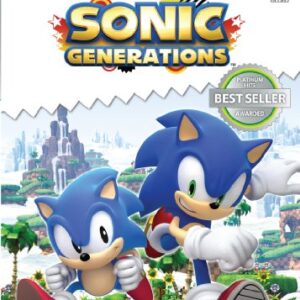 Product Description
Set across three defining eras from 20 years of Sonic the Hedgehog video game history, the instantly recognizable environments of Sonic Generations have been re-built in stunning HD and are now playable in both classic side scrolling 2D from 1991, as well as modern 3D style found in Sonic's most recent adventures.

Sonic Generations is a single player Action Platforming game that blends 20 years of the adventures of Sega's iconic video game hedgehog into a single release not to be missed by longtime and new fans alike. Travel through time, sprinting through side-scrolling levels on a race for rings as you play as either the modern version of Sonic or one inspired by classic game releases on Sega specific gaming consoles from the past. Additional features include: levels inspired by Sonic games releases stretching back to 1991, the ability to play as either version of Sonic, release specific power-ups and moves, infamous Sonic bosses and rivals, side missions, unlockable content and compatibility with 3D TVs. 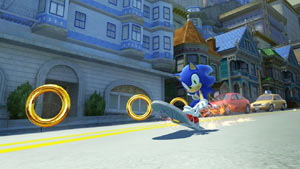 Celebrate the 20th Anniversary of the Sonic video game franchise with a time altering adventure like no other.
View larger

Sonic Generations is the ultimate celebration of 20 years in Sonic gaming, delivering the definitive gaming experience for Sonic fans new and experienced. In Sonic Generations Sonic's birthday and universe is thrown into chaos when a mysterious new power reveals itself, creating 'time holes' which take Sonic and his friends back in time. While there, Sonic runs into some very familiar characters from his past including a younger, classic version of himself. Together these two Sonics must defeat their enemies, save their friends, and find out who is behind this diabolical deed. The game features levels inspired by all three console based eras of Sonic gameplay: classic Sega Genesis, Dreamcast and the modern game consoles of today. All of these are presented in crystal-clear HD, and are playable on 3D TVs. As you travel through Sonic's history elements such as attacks, available power-ups and other features remain consistent with franchise gameplay history as well, with the main difference being that players have the ability to choose which version of Sonic they would like to play as.

Be the first to review “Sonic Generations – Xbox 360” Cancel reply