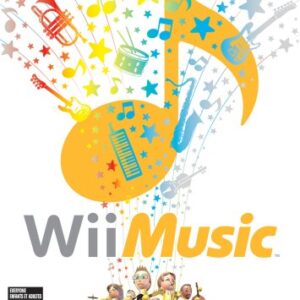 Amazon.com
When it comes to music and rhythm games, Wii Music stands in a class of its own. Unlike other music games, which penalize players if they don't play perfectly, Wii Music is a musical playground where there are no mistakes. Here anyone can pick up and master the huge array of instruments available, through simple motions like strumming and drumming. Musicians in your band jam by simply playing their instruments to the beat of a song or by improvising to their heart's content. Play faster. Play slower. Skip a beat, or throw in 10 more. No matter what you do, Wii Music automatically transforms your improv stylings into great music.

Gameplay: Getting Your Band Together
In Wii Music every band has six members: Two play the main melody, two cover the percussion beats, one covers the bass groove and one uses the song's chords to support the melody. As a band, the six members often play their special parts at the same time, though each player can jam however and whenever he or she wants. Play all at once. Take turns in the spotlight. Pair up in creative ways throughout the song. You can bring the band to life by yourself, playing one part at a time-or with up to four players. See game mode below: Tutes: Your Own Private Back-up Band
When not playing with friends, you can invite jam masters known as Tutes to play with you. They'll join a session playing an instrument that each thinks is strong for a specific song. You can simply enjoy the musical camaraderie, or pick up instrument tips by watching them jam. If you choose to watch, the Tutes will show you lots of techniques for many of these instruments, then ask you to follow their examples. They'll start with the simplest techniques, then as you master each one, show you even more nuanced ones. Key Game Features:
60+ Instruments
You can play most of the 60-plus instruments in Wii Music using simple motions with the Wii Remote and Nunchuk controllers. Strum to play guitar, banjo and sitar. Drum to play jazz drums, congas and marching drums. Hammer away to play piano, vibraphone and marimba. Unlike most music games, Wii Music doesn't make you use complex buttons. You only need to imitate playing the instrument. Wii Music offers virtually endless ways to make music. Fun Beyond the Jam
Designed with classic Wii gameplay in mind, Wii Music includes many other modes and play options besides the main band jams, including several musical games and an enhanced video playback mode for recorded jams.

Be the first to review “Wii Music” Cancel reply