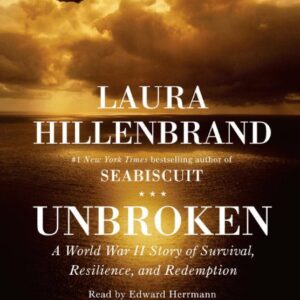 On a May afternoon in 1943, an Army Air Forces bomber crashed into the Pacific Ocean and disappeared, leaving only a spray of debris and a slick of oil, gasoline, and blood. Then, on the ocean surface, a face appeared. It was that of a young lieutenant, the plane’s bombardier, who was struggling to a life raft and pulling himself aboard. So began one of the most extraordinary odysseys of the Second World War.

The lieutenant’s name was Louis Zamperini. In boyhood, he’d been a cunning and incorrigible delinquent, breaking into houses, brawling, and fleeing his home to ride the rails. As a teenager, he had channeled his defiance into running, discovering a prodigious talent that had carried him to the Berlin Olympics and within sight of the four-minute mile. But when war had come, the athlete had become an airman, embarking on a journey that led to his doomed flight, a tiny raft, and a drift into the unknown.

Ahead of Zamperini lay thousands of miles of open ocean, leaping sharks, a foundering raft, thirst and starvation, enemy aircraft, and, beyond, a trial even greater. Driven to the limits of endurance, Zamperini would answer desperation with ingenuity; suffering with hope, resolve, and humor; brutality with rebellion. His fate, whether triumph or tragedy, would be suspended on the fraying wire of his will.

In her long-awaited new book, Laura Hillenbrand writes with the same rich and vivid narrative voice she displayed in Seabiscuit. Telling an unforgettable story of a man’s journey into extremity, Unbroken is a testament to the resilience of the human mind, body, and spirit.

“[A] one-in-a-billion story . . . designed to wrench from self-respecting critics all the blurby adjectives we normally try to avoid: It is amazing, unforgettable, gripping, harrowing, chilling, and inspiring.”—New York

“Staggering . . . mesmerizing . . . Hillenbrand’s writing is so ferociously cinematic, the events she describes so incredible, you don’t dare take your eyes off the page.”—People

“Marvelous . . . Unbroken is wonderful twice over, for the tale it tells and for the way it’s told. . . . It manages maximum velocity with no loss of subtlety.”—Newsweek

“Moving and, yes, inspirational . . . [Laura] Hillenbrand’s unforgettable book . . . deserve[s] pride of place alongside the best works of literature that chart the complications and the hard-won triumphs of so-called ordinary Americans and their extraordinary time.”—Maureen Corrigan, Fresh Air

“Hillenbrand . . . tells [this] story with cool elegance but at a thrilling sprinter’s pace.”—Time

“Unbroken is too much book to hope for: a hellride of a story in the grip of the one writer who can handle it.”—Christopher McDougall, author of Born to Run

Amazon.com Review
Amazon Best Books of the Month, November 2010: From Laura Hillenbrand, the bestselling author of Seabiscuit, comes Unbroken, the inspiring true story of a man who lived through a series of catastrophes almost too incredible to be believed. In evocative, immediate descriptions, Hillenbrand unfurls the story of Louie Zamperini--a juvenile delinquent-turned-Olympic runner-turned-Army hero. During a routine search mission over the Pacific, Louie’s plane crashed into the ocean, and what happened to him over the next three years of his life is a story that will keep you glued to the pages, eagerly awaiting the next turn in the story and fearing it at the same time. You’ll cheer for the man who somehow maintained his selfhood and humanity despite the monumental degradations he suffered, and you’ll want to share this book with everyone you know. --Juliet Disparte

The Story of Unbroken by Laura Hillenbrand

Eight years ago, an old man told me a story that took my breath away. His name was Louie Zamperini, and from the day I first spoke to him, his almost incomprehensibly dramatic life was my obsession.

It was a horse--the subject of my first book, Seabiscuit: An American Legend--who led me to Louie. As I researched the Depression-era racehorse, I kept coming across stories about Louie, a 1930s track star who endured an amazing odyssey in World War II. I knew only a little about him then, but I couldn’t shake him from my mind. After I finished Seabiscuit, I tracked Louie down, called him and asked about his life. For the next hour, he had me transfixed.

Growing up in California in the 1920s, Louie was a hellraiser, stealing everything edible that he could carry, staging elaborate pranks, getting in fistfights, and bedeviling the local police. But as a teenager, he emerged as one of the greatest runners America had ever seen, competing at the 1936 Berlin Olympics, where he put on a sensational performance, crossed paths with Hitler, and stole a German flag right off the Reich Chancellery. He was preparing for the 1940 Olympics, and closing in on the fabled four-minute mile, when World War II began. Louie joined the Army Air Corps, becoming a bombardier. Stationed on Oahu, he survived harrowing combat, including an epic air battle that ended when his plane crash-landed, some six hundred holes in its fuselage and half the crew seriously wounded.

On a May afternoon in 1943, Louie took off on a search mission for a lost plane. Somewhere over the Pacific, the engines on his bomber failed. The plane plummeted into the sea, leaving Louie and two other men stranded on a tiny raft. Drifting for weeks and thousands of miles, they endured starvation and desperate thirst, sharks that leapt aboard the raft, trying to drag them off, a machine-gun attack from a Japanese bomber, and a typhoon with waves some forty feet high. At last, they spotted an island. As they rowed toward it, unbeknownst to them, a Japanese military boat was lurking nearby. Louie’s journey had only just begun.

That first conversation with Louie was a pivot point in my life. Fascinated by his experiences, and the mystery of how a man could overcome so much, I began a seven-year journey through his story. I found it in diaries, letters and unpublished memoirs; in the memories of his family and friends, fellow Olympians, former American airmen and Japanese veterans; in forgotten papers in archives as far-flung as Oslo and Canberra. Along the way, there were staggering surprises, and Louie’s unlikely, inspiring story came alive for me. It is a tale of daring, defiance, persistence, ingenuity, and the ferocious will of a man who refused to be broken.

The culmination of my journey is my new book, Unbroken: A World War II Story of Survival, Resilience, and Redemption. I hope you are as spellbound by Louie’s life as I am.

Be the first to review “Unbroken: A World War II Story of Survival, Resilience, and Redemption” Cancel reply