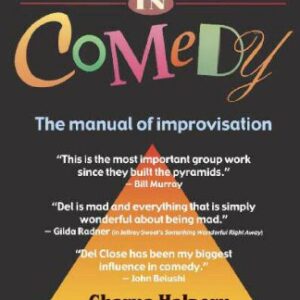 Truth in Comedy: The Manual for Improvisation

Truth In Comedy is a Meriwether Publishing publication.

This improv manual introduced the concepts of the "Harold" -- the innovative improvisational tool that helped Saturday Night Live's Mike Myers, Chris Farley, George Wendt, and many others on the road to TV and film stardom. The innovative concepts are described fully in this insightful theatre book that has become the bible for wannabe improvisers. The "Harold" is an improv form involving six or seven players. It consists of many things: scenes, songs, games, and monologs -- the most important of which is the two-scene beginning. A strong opening develops the point of view for "The Group Mind" to follow, often with three different storylines. It tells how to create a non-linear entertainment that remembers everything and wastes nothing -- the key to successful improvising.

Amazon.com Review
Who would have ever thought that learning the finer points of improvisation could be such fun? The "Harold," an innovative improvisational tool, helped Saturday Night Live's Mike Myers and Chris Farley, George Wendt (Norm on "Cheers") and many other actors on the road to TV and film stardom. Now it is described fully in this new book for the benefit of other would-be actors and comics. The "Harold" is a form of competitive improv involving six or seven players. They take a theme suggestion from the audience and free-associate on the theme, creating a series of rapid-fire one-liners that build into totally unpredictable skits with hilarious results. The teams compete with scoring based on applause. The "Harold" is a fun way to "loosen up" and learn to think quickly, build continuity, develop characterizations and sharpen humor.

Be the first to review “Truth in Comedy: The Manual for Improvisation” Cancel reply