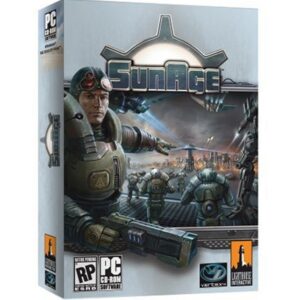 Earth is a desolate wasteland destroyed by the radiation and heat of the sun. Humankind, known as the Dome Confederacy, has been forced to retreat into shielded cities enduring constant attacks by the Raak-zun cult; a sect of religious outcasts who live outside the dome. An age long war has ensued as both races battle for the limited resources of the dying planet and search for a new world to inhabit.

Amidst the havoc, the gateway to a bold new planet is unlocked. Hope is on the horizon, but a new war has dawned as this Mecca is teeming with lethal Sentinel drones who will not hesitate to annihilate any life form that gets in their way. Leading the Dome Confederacy, you must destroy your enemies in a race to secure a new home and future for all humankind.FEATURES:

Be the first to review “SunAge – PC” Cancel reply