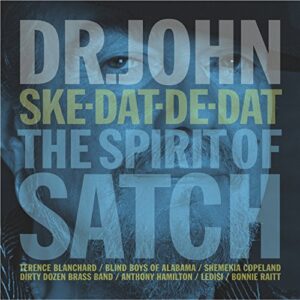 Ske-Dat-De-Dat: The Spirit of Satch

Rock and Roll Hall of Fame inductee and six-time GRAMMY®-winner Dr. John is New Orleans' most prominent living musical icon. The embodiment of his hometown's freewheeling creative spirit and multiple musical traditions, he's built a visionary, idiosyncratic body of work that's deeply rooted in the Crescent City's myriad blues, R&B, jazz and rock 'n' roll traditions. So it's fitting that Dr. John's August 19, 2014 release on Concord Records, Ske-Dat-De-Dat...The Spirit Of Satch, pays heartfelt tribute to another larger-than-life New Orleans legend: the seminal trumpeter and vocalist Louis "Satchmo" Armstrong, whose musical innovations created the template for 20th-century jazz, and whose playful attitude and life-embracing spirit made him a beloved figure whose worldwide appeal transcended music. "He's the most famous guy that ever came out of my neighborhood," notes Dr. John. "He became a legend all over, for his trumpet playin' and everything else, and he was the United States' ambassador to the world."

Ske-Dat-De-Dat...The Spirit Of Satch honors Armstrong's musical genius as well as his effervescent personality with 13 quintessential numbers drawn from various phases of Armstrong's five-decade career, with Dr. John joined by a stellar supporting cast that manages to update the material while maintaining the music's timeless emotional appeal. In addition to Dr. John's trademark vocals and piano, and backup from some of New Orleans' finest musicians, Ske-Dat-De-Dat…The Spirit Of Satch features a stellar assortment of guest singers and players. Bonnie Raitt shares the spotlight on a swinging reading of "I've Got the World on a String," Ledisi and the McCrary Sisters lend gospel authority to "Nobody Knows the Trouble I've Seen," Anthony Hamilton is featured on a mournful "Sometimes I Feel Like a Motherless Child," Shemekia Copeland trades verses with Dr. John on a playful reworking on "Sweet Hunk O' Trash," and the Blind Boys of Alabama lend their powerful voices to "What a Wonderful World" and "Wrap Your Troubles in Dreams."

Be the first to review “Ske-Dat-De-Dat: The Spirit of Satch” Cancel reply