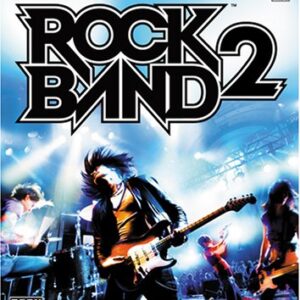 
Continue Your Rock and Roll Fantasy

Rock Band 2 lets you and your friends take your band on an even more expansive and immersive world tour - in person or online - and continue your rock and roll fantasy.

Harmonix, deliver Rock Band 2, the next step to the platform that lets audiences of all ages interact with music in an all-new way. Rock Band 2 lets players vicariously jam out as some of the best guitarists, bassists, drummers and singers of all time.

Featuring a track list with more than 100 on-disc and downloadable tracks from some of the most hallowed bands of the rock pantheon, Rock Band 2 by challenges rockers to master lead guitar, bass guitar, drums and vocals.