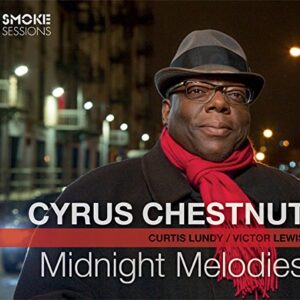 THIS NEARLY PERFECT SET OF PIANO TRIO, captured at Smoke Jazz & Supper Club in New York, is Cyrus Chestnut s first live recording date. It retains all of the feeling of a live performance and Cyrus claims that Smoke's Steinway B is the best piano in the city. 'It s just my ticket. We connect. It s warm and it s sharp at the same time with a lot of earth in it. I like clubs like the Jazz Standard or Smoke, where you can sit down at the piano and get down-home, because that s the kind of audience they attract.' Joining Cyrus are bassist Curtis Lundy and drummer Victor Lewis. Together they take listeners on a musical odyssey that includes music by Billy Strayhorn, John Coltrane, and, of course, John Hicks. There are also originals by Victor Lewis and Cyrus culminating in an impressive extemporaneous medley. Cyrus is one of the great piano voices of his generation or any generation as he proves again with this rewarding live debut. Midnight Melodies is available for purchase as an 8-panel CD-Deluxe Album complete with liner notes, interview and additional photos.

Be the first to review “Midnight Melodies” Cancel reply