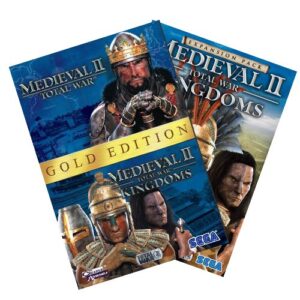 Medieval II: Total War is a truly epic strategy game that puts you in charge of one of the powers of the middle ages, allowing you to lead your soldiers on the field of battle, as well as plan the expansion of your empire across the Old World. Unlike most other strategy games, Total War games separate the action of battle from managing your empire's affairs. These are the battle and campaign sides of the game respectively.

Medieval II: Total War offers the complete warfare experience, with realistic battle mechanics and historical accuracy. You will need to master the same tactics that actual field commanders used in real combat situations, and you will do it with exactly the same sorts of troops, armour and weapons that took to the field of battle in the middle ages. This is the time of great leaders such as Richard the Lionheart and Saladin. This is the time of noble knights, mighty castles, acts of chivalry, religious crusades and deadly treachery. This is your time to conquer the world!