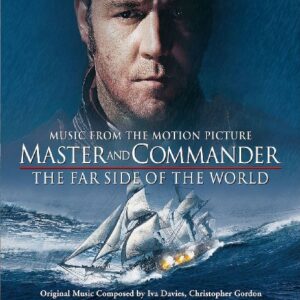 Master and Commander: The Far Side of the World

A trio of noted Australian musicians--Iva Davies, Richard Tognetti and Christopher Gordon--composed the film's score. They previously collaborated on "The Ghost of Time," a piece commissioned for the Millennium celebrations in Sydney, which came to the attention of Peter Weir. The director was so impressed, he played the piece on the Master And Commander set throughout production, and he asked its creators to write the music for his movie. The score interweaves "Old World" and "New World" music, reflecting the talents and backgrounds of its composers. Iva Davies hails from both pop and classical traditions; Richard Tognetti, one of the world's great violin virtuosos, taught Russell Crowe the ins and outs of the instrument; and film/television composer Christopher Gordon brought orchestral texture to the project. Given the period, it comes as no surprise that the score is infused with source music from Bach (Cello Suite) and Mozart, among other great classical composers. Percussion dominates portions of the score. "Drums signal the forward movement of the ship," says Davies, "that it's on a mission. It brings you back into the action." The score's biggest surprise comes with its use of synthesizers. "Peter doesn't make films in the expected way," says Davies, "and for that reason we wanted the score to be not what everyone expected. Peter wanted some scenes to have what I call a kind of 'futuristic' sense"--conveying the idea that these 19th century sailors were cutting-edge explorers.

Be the first to review “Master and Commander: The Far Side of the World” Cancel reply