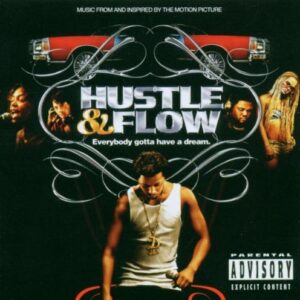 Amazon.com
"Everybody wanna be the king of the South" rhymes the P$C crew (featuring T.I. and Lil Scrappy), kicking off the Hustle & Flow soundtrack with the amped-up "I'm A King" remix. This film, about a Memphis hustler trying to become a respected rapper, won the Audience Award at the 2005 Sundance Film Festival, and appropriately, the soundtrack has the hottest dirty South (a.k.a. crunk) songs around. Lead actor Terrence Howard is a double-threat, not just playing up-and-coming rapper DJay, but also performing on a number of tracks in character. From the blacksploitation-affected "It's Hard Out Here For A Pimp" to the equally ('70s-esque title track, his contributions are respectable, but not nearly as pumped-up and crunked-out as the disc's standout tracks. Although the CD is rap-heavy, there are some great moments on the R&B front as well, including Eightball & M.J.G.'s lost-love track "Tell Me Why," and the disc highlight, "Still Tippin'", a Mike Jones/Nicole Wray remix that brings sweet Tweet-like grooves to the collection. Some of the CD's other contributors include Juvenile (who is typically clever in "Booty Language") and Webbie, who battles with Trina on "Bad B**ch Remix". Moms and dads should be forewarned, however, that there is nothing subtle about the lyrics on this disc: true to crunk, every imaginable expletive is crammed into these 20 songs and sound bytes, along with a hefty dose of gang-style posturing. For the under-18 set, best reach for the clean version. --Denise Sheppard

Be the first to review “Hustle & Flow” Cancel reply