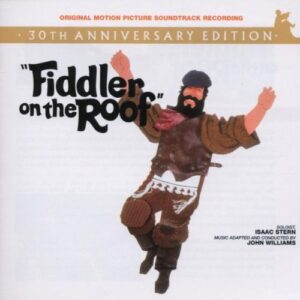 Fiddler on the Roof

Product Description
One of the most jubilant, beloved soundtracks of all time just got even better! This 30th-anniversary reissue includes If I Were a Rich Man; Sunrise, Sunset; Matchmaker , and the rest of the original release (featuring the late, great Isaac Stern)-PLUS five unreleased tracks, a recently discovered "underscore" by conductor John Williams, rare photos, movie memorabilia and new notes!

Amazon.com
This new version of the Fiddler on the Roof soundtrack coincides with the movie's 30th anniversary (which is also celebrated by a special edition DVD). The CD is notable for several instrumental tracks by John Williams, as well as for "Any Day Now," a previously unreleased song performed by Perchik/Paul Michael Glaser (better known for his starring role in TV's Starsky and Hutch). The soundtrack is often compared unfavorably with the original 1964 cast album, in which Zero Mostel played the part of Tevye (here performed by Topol, who had been in the 1967 London production). But this CD has a lot going for it, including glossy remastering and, of course, Isaac Stern as the fiddler. In the end, whatever version you decide to pick up, Fiddler remains one of the most enduring musicals of all time. --Elisabeth Vincentelli

Be the first to review “Fiddler on the Roof” Cancel reply