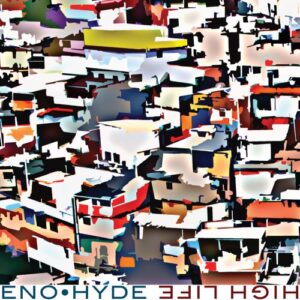 Within weeks of the release of their acclaimed debut album
Someday World, Warp is excited to reveal that the collaboration
between Brian Eno and Karl Hyde continues with a
second full-length album, High Life, to be released July
1st.
Written and recorded across a series of recording sessions
in April of 2014 (some of which were open to selected
media from around the world), none of the music on High
Life existed before Someday World was completed! The
resulting record, at 6 tracks and 45 minutes, is the clearest
expression yet of the 'Reichkuti' (Steve Reich meets Fela
Kuti) direction that first brought the Eno Hyde collaboration
into being. And as the polyrhythms and melodies build, swirl
and syncopate, the album feels truly alive with the energy of
this time in the studio.
High Life reunites Eno and Hyde with the 20 year old
producer/multi-instrumentalist Fred Gibson, previous
Eno-collaborator Leo Abrahams on guitar, drummer Chris
Vatalaro, and keyboardist Don E. Taken alongside Someday
World, it provides a fascinating insight in to how consistent
influences can lead to very different but connected music, and
continues to tell the story of two iconic musicians collaborating
and exploring together. We look forward to seeing how fans
select their own favorites across the two albums.

Be the first to review “High Life” Cancel reply