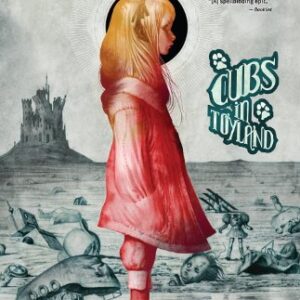 For years, Snow White and Bigby Wolf's cubs have grown up knowing that one of them was destined for a much greater, more grave role amongst the Fables community. But no one knew how soon it would come.

When Snow and Bigby's cub Therese receives a Christmas gift from an unknown admirer, this red plastic boat magically takes her on a journey to a desolate place known as Toyland. Will Therese be their savior? Or their destroyer? FABLES VOL. 18: CUBS IN TOYLAND is the latest epic from New York Times best-selling author Bill Willingham's hit series FABLES, as the Bigby Wolf cubs learn that adventures in the land of misfit toys is much less fun than it sounds.

Also collected here are all the backup stories that feature Bufkin's exploits in the land of Oz, beautifully painted by Shaw McManus (CINDERELLA: FROM FABLETOWN WITH LOVE).

Q. Bill, the popularity of Fables hasn’t waned since its debut in 2002. What do you think is the greatest appeal of the title?

A. Bill Willingham: I think a couple of things. Fables draws on folklore, which by definition is stories that everyone owns. Every single person in the entire world owns these stories. It’s not like it’s collectively owned—if we want to do a new Snow White story, we don’t have to all come together and determine “This is what it’s going to be.” It’s individual ownership of this vast, vast library of stories. So everyone, by virtue of being “folk” in “folk lore,” is born rich, because everyone owns all of this, and can do all of this with it. So maybe the loyal readership on Fables is everyone protecting their investment, saying, “This is my stuff and it’s paying off well.” And I don’t think that’s entirely facetious. You know these people; you’ve heard these stories forever (“you” being the reader). It’s like an old friend: “Have you heard what’s been happening to Snow White, lately? I haven’t heard from her in years, what’s she up to?” I don’t trust its popularity though. I still feel like Fables is going to make it some day. I don’t count on the readers being there from issue to issue. I don’t take the reader for granted.

Q. You've touched on almost every fairy tale and literary classic—from Beauty and the Beast to Little Boy Blue to most recently the Wizard of Oz. Growing up, what were some of your personal favorite tales and how has that informed your approach to writing it in this series?

A. Bill Willingham: My personal and favorite tales growing up, possibly my all-time favorite fairy tale character was the Big Bad Wolf because that was the only one I was aware of early on as a kid appearing in more than one fairy tale. Big Bad Wolf went after the pigs and didn’t quite make it there. Big Bad Wolf went after Red Riding Hood, didn’t quite make it there. So, I just love the fact that just like in comics, fairy tales can show up in different stories. Which is probably why I made him into a hero in Fables. He would have made a great villain, still, but I’d use him once or twice and then I’d have to get rid of him. Because the worst thing in the world is the villain who keeps on coming back. Then it’s not really a story about the villain but about incompetent heroes.

I used to love Fractured Fairytales as a kid, so most of those characters had to show up in Fables. I think I got most of them, but I'm not certain.

Little Boy Blue was never meant to be an important character. He was just there, foot in the office, someone for Snow White to talk to. He kind of expanded his character in the book.

Q. As mentioned previously, these characters have existed for a long, long time, and people have a certain level of love and attachment to them. What would you say is some of the most surprising feedback you've gotten?

A. Bill Willingham: Almost none of it comes as a surprise. And I don’t mean that to sound jaded. What surprises me most is that real folklore scholars have done papers on Fables—sometimes I’ve found out about it accidentally, sometimes they let me know. I’m just a guy that’s spinning comic book stories. They ask, “What’s your research methods?” and such and refer to me as a “well-known folklore scholar.” I’m not a scholar on anything. I read the stuff I like, and if it stays with me, I like it enough to spin a story out of it. But the fact that the important intellectual academic is aware of this surprises me.

The thing that doesn't surprise me is that a German folklore specialist will correct me and say that the Snow White and the Seven Dwarfs is the not the same Snow White as Snow White and Rose Red. Even though in English, both translate to “Snow White,” they are two very different names in German. I was aware of this, but we’re doing this in English, so I’m going to make them the same person. They're two fairytales that don’t really match up, but I felt that it was challenging to make them the same person.

Q. Has there been a fjairy tale or literary character that you’ve found challenging to adapt as a player in Fables?

A. Bill Willingham: The humble and obvious answer is all of them. The other answer is a few. Modernizing them without losing what was important about them is always a challenge. Snow White for example. I wanted her as a tough as nails businesswoman, not taking any nonsense from the whiny bastards. The challenges were was there anything in the original stories that predicated this. In the original stories, she had true love. But in our story, Prince Charming is a womanizer, so true love didn’t last a while. Prince Charming had many episodes of “true love” down the road, so she gets betrayed by Prince Charming by her own sister, she gets betrayed by her own stepmother with the poisoned apple, she gets betrayed by her original mom who sent her away. With Snow White, the obvious thing here was “trust issues.” If you have trust issues, you either become the perpetual victim, or you become this strong, “No one’s going to hurt me again because I’m going to become a captain of my own life.” The problem is, when you do a strong “I’m not going to take any nonsense” character in anything, people love that. But there’s always going to be people who will complain that she’s an emasculating hateful woman. I don’t think that’s the case. Luckily the series has lasted long enough where we’ve been able to show many sides to her personality. That was a challenge.

Q. With over 100 issues, two original graphic novels and a novel in the rearview mirror, are there any loose plot threads that you lament not getting to?

A. Bill Willingham: Oh, yeah. Not only loose plot threads that were things that we planned from the beginning, but also every single story suggests so many other stories to follow up on. For example, when the Arabian Fables showed up, we could have changed it to an all-Arabian book; we could have spent a hundred years just exploring that corner. Instead, we didn’t and we went back to our core cast. But it’s like the population grows. The stories are begetting other stories ideas and pretty soon we have this overcrowded earth and there are hundreds of stories that we won’t be able to get to because, unfortunately, medicine is letting us down and I’m not immortal yet. Hal Foster, when he was doing Prince Valiant, was doing this incredible sprawling story that went on for more than thirty years of his life, so we saw Prince Valiant as a kid, we saw him growing up, falling in love and then we saw his kids grow up. This was done in real time, so we didn’t jump ahead years. I would love to be able to do that.

Q. Fairest is a series that serves as a sister series to Fables, focusing specifically on the lovely ladies of Fabletown. What are some of stories you have planned? Will they mostly be present day tales? Flashbacks?

A. Bill Willingham: It mostly is a mix. The first one concentrates on Briar Rose, where we had the present day “what happening in her life,” but in order to explain why she’s in the predicament, we showed her origin with the seven fairies that gave her blessings and then the fairy that was slighted.

We just started a Rapunzel storyline written by wonderful South African writer Lauren Beukes. Once again, it doesn’t exactly take place in present day. It takes place years ago before the first Fables issue. But it also takes place then, and in ancient Japan. Because they are all essentially immortal characters, we have the ability to spill all over the time map.

The one to follow, which will introduce a brand-new East Indian folklore character will once again take place in present day with carefully, strategically-placed flashbacks to see how she got to where she is and how she got to the places she’s been.

Q. In the Fables: Werewolves of the Heartland original graphic novel, you're telling an epic Bigby Wolf story. Why did you decide to spin this off into a separate OGN rather than keep it in the series?

A. Bill Willingham: It’s an epic Bigby Wolf story. For some time—this story is at least three years in production (and then some)—we wanted Bigby Wolf to have this story, to go out and have a story and be the Big Bad Wolf. Since it was a single character and predicated on him leaving the rest of the community for a while, it seemed to natural to spin it off into it’s own graphic novel.

Q. You’ve been writing Fables for a decade now. Looking towards the future, how much more do you have in you? Is there another spin-off you'd love to do?

A. Bill Willingham: I’m very old. I’ll probably die soon before we get to it. There’s always another spin-off I’d love to do. With Fables, we didn’t create a story, we created a setting. It’s a fictional world where all types of stories can take place. People ask me, “When is Fables coming to an end?” The clear answer is that stories end all the time. But then because the stories are in this setting such that it is, we start it all the time. So yes, there’s always going to be a desire to spin off more and more stories.

Q. Which Bigby Wolf will we see in Werewolves of the Heartland? The gruff, law-keeping chain smoker from earlier in the series, or the caring father he's been lately?

Q. Which do you prefer, the original graphic novel format where the story is finite and self-contained, or the spanning Fables series in which the story can go several different directions at any point?

Be the first to review “Fables, Vol. 18: Cubs in Toyland” Cancel reply