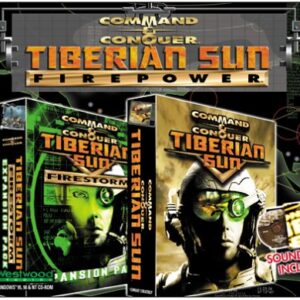 Amazon.com
For those of you who haven't yet chosen sides in the Command & Conquer conflict, here's your chance to acquire both Command & Conquer: Tiberian Sun and its Command & Conquer: Tiberian Sun, Firestorm expansion set in one package. Tiberian Sun pits the militaristic forces of the Global Defense Initiative against the Brotherhood of Nod, an equally well-armed religious order. You may play either side as the factions fight to control an ecologically ravaged Earth. The key to winning is tiberium, a plant that serves as raw material for weapons and factories. Controlling this powerful fuel source allows you to generate funds, raise armies, and fend off destruction. Firestorm raises the stakes with new units, new artwork, new video cutscenes, and a new multiplayer game mode called World Domination, where you can battle other players over the Internet for free.