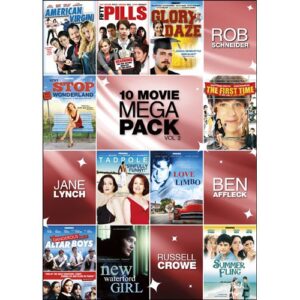 GLORY DAZE
Unwilling to say goodbye to the party life, Jack and his four raunchy housemates face the surreal week of college graduation together.

LOVE IN LIMBO
A teenage virgin tries to turn his wealth of sexual knowledge into an actual encounter with a woman.

TADPOLE
A 15-year-old boy meets a sexy 40-something who actually takes him up on his infatuation with older women.

NEXT STOP WONDERLAND
In a dating slump, Erin meets with a series of suitors...only to miss numerous chance encounters with her perfect match.

LAST OF THE HIGH KINGS
Frankie is pretty sure he has blown his shot at getting into college, so he focuses his attention on beach bashes and bikini babes.

DANGEROUS LIVES OF ALTER BOYS
Tim and Francis are best friends, doing their best to cause trouble without getting caught. Under the watchful eye of Sister Assumpta, the boys plot to unleash the ultimate prank.

AMERICAN VIRGIN
Priscilla White, a virginal college freshman, ruins her squeaky-clean reputation and embarks on a cross-country trip to recover the incriminating evidence.

THE FIRST TIME
Victor, a hapless high school freshman, has an incurable crush on hot senior, Anya. Too bad she's way out of his league and doesn't know he exists.

Night at the Museum: Battle of the Smithsonian: World Premiere