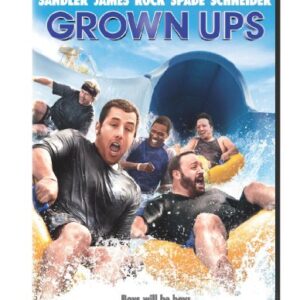 Product Description
Just because you grow older doesn’t mean you have to grow up! Comedy superstars Adam Sandler, Kevin James, Chris Rock, David Spade and Rob Schneider are at their hilarious and outrageous best playing childhood friends who reunite one holiday weekend to relive the good old days. It doesn’t matter that these five guys are now respectable businessmen, husbands and fathers. Once they get back together, nothing is going to stop these kids-at-heart from having the time of their adult lives. From the people who brought you Click, comes this hilarious and heartwarming film that proves men will be boys.

Amazon.com
Adam Sandler and his frequent costars (Chris Rock, Kevin James, David Spade, and Rob Schneider) grope blindly for maturity in the genial comedy Grown Ups. Five childhood pals are drawn back together after the death of their former basketball coach; over the course of a Fourth of July weekend, they--along with their wildly attractive wives (played by Salma Hayek, Maria Bello, Maya Rudolph) and precocious children--loosen up, try to introduce their kids to the simple pleasures of nature, air some dirty laundry, and rediscover their friendship. In other words, it's a fairly formulaic comedy that veers awkwardly from gags (ranging from slapstick to mean-spiritedness) to sentiment (ranging from sappy to not entirely sappy). Its appeal will depend entirely on your feelings about Sandler and the rest of the gang--if you like this bunch of lugs (in all their prolonged adolescent glory), then you'll like this movie. If you don't, you won't. Everyone's in relaxed but good form; affable is more the comic goal than razor sharp. Expect gags about being fat, being old, prolonged breast-feeding, ogling hot chicks, flatulence, etc. There's some role reversal: it's the women, particularly Hayek as a type-A fashion designer, who need to learn the eternal cinematic lesson that family is more important than work. Featuring guest appearances from Tim Meadows, Colin Quinn, and Steve Buscemi. --Bret Fetzer

Be the first to review “Grown Ups” Cancel reply