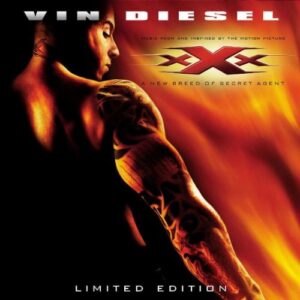 Amazon.com
There's nothing diminutive about Vin Diesel or XXX, the secret agent-espionage film in which the muscular actor stars, so it's not surprising that the accompanying two-disc soundtrack is just as punishing. On the rock-oriented album, electronic production zaps through Rammstein's machine-gun blast "Feuer Frei" and Queens of the Stone Age's rough-riffed "Millionaire," while Mushroomhead and Hatebreed's straight-ahead screamers pack a ferocious punch. Other cuts are more forgiving--Bush's Gavin Rossdale contributes a soaring, crunchy rock anthem, Orbital's zooming, danceable "Technologicque Park" is inky as a starless night, and Moby's hypnotic, simple-synth "Landing" features Azure Ray on vocals. The hip-hop side isn't nearly as pulverizing--Nelly's stuttering "Stick Out Ya Wrist" and Big Tymers' "Still Fly" are especially laid-back and chilled. In the end, the results are mixed--Rossdale's song is livelier than most of his output with Bush, and the Queens and Rammstein cuts jump with life, as do those from Pastor Troy and Joi. Yet overall the generic rap disc and growling sections of its rock counterpart falter, suffering from all-too-familiar tricks and lackluster lyrics--sending the entire album sliding into mediocrity as a whole. --Annie Zaleski