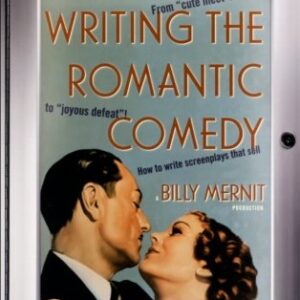 From the slapstick shenanigans of Hepburn and Grant in Bringing Up Baby to the sexy repartee of Shakespeare in Love, romantic comedies have delighted filmgoers -- and challenged screenwriters -- since Hollywood's Golden Age.

Whether you're a first time screenwriter, or an intermediate marooned in the rewriting process, this thoroughly charming and insightful guide to the basics of crafting a winning script will take you step by step from "cute meet" all the way to "joyous defeat." You'll learn the screenwriting secrets behind some of the funniest scenes ever written; how to create characters and dialogue that set the sparks flying; why some bedroom scenes sizzle and others fall flat; and much more. Writing the Romantic Comedy features case studies drawn from beloved romantic comedies such as When Harry Met Sally, Annie Hall, Tootsie, and The Lady Eve, as well as field-tested writing exercises guaranteed to short-circuit potential mistakes and ensure inspiration.

Amazon.com Review
According to Billy Mernit, all the Hollywood studios--and most major actors--"are actively seeking romantic comedies." But the same studios and actors reject hundreds of romantic comedies a month. Mernit should know. As a story analyst who has read nearly 4,000 screenplays in the last 10 years, Mernit has seen the good, yes, but also too much of the bad and the ugly. With Writing the Romantic Comedy, Mernit presents his UCLA Extension rom-com writing workshop in book form. Believe it or not, it's not enough to have Meg Ryan and Tom Hanks play the leads. You actually have to create characters for them--characters that an audience will believe "absolutely must end up together." Mernit manages to lay down ground rules without seeming rigid: "he can't be in it only for the sex"; "she can't be in it only for the money"; "at least one scene or sequence [should be] laugh-out-loud funny." Mernit offers five ways to bring your characters to life and seven basic romantic comedy "beats." He has chapters on chemistry, humor, dialogue, and sex ("in romantic comedy, there's nothing sexier than sublimated sex"), and he draws generously upon the surprisingly small canon of great romantic comedies to demonstrate his points. Finally, given that the conflicts in romantic comedies are internal, you needn't look far for inspiration when you feel stuck. "Think of one of the most painful, humiliating, embarrassing things that ever happened to you with someone of the opposite sex," he says, and go from there. --Jane Steinberg

Be the first to review “Writing the Romantic Comedy” Cancel reply