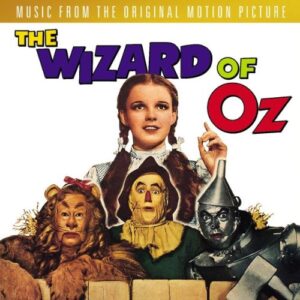 Amazon.com
Lions and tigers and bears, the yellow brick road, gamboling midgets, warnings scrawled high above by a skywriting witch: No movie ever imprinted itself on young imaginations or endured in adult memory more than MGM's classic 1939 musical, and no movie score ever hooked as forcefully into our collective cultural memory. This exemplary soundtrack finally treats this deserved classic to a thoughtful and comprehensive rendering (an even more detailed, expanded version was also released simultaneously as a deluxe box) that confirms the enduring power of Harold Arlen's original music and E. Y. "Yip" Harburg's lyrics. On film, the songs unreeled as a mixture of discreet songs and multi-themed medleys with frequent reprises, a presentation preserved here, epitomized in the "Munchkinland Musical Sequence." If not as concise as Bobby McFerrin's legendary, hilarious concert compression of the entire musical story, this telling of The Wizard of Oz relives the film just as vividly. "Over the Rainbow" is here, of course, precisely where it should be in the sequence, as as timelessly luminous and wistful as ever. --Sam Sutherland

Be the first to review “The Wizard Of Oz: Original Motion Picture Soundtrack” Cancel reply