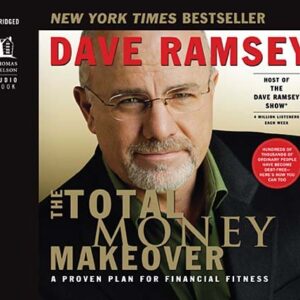 The Total Money Makeover: A Proven Plan for Financial Fitness

The success stories speak for themselves in this audio book from money maestro Dave Ramsey. Instead of promising the normal dose of quick fixes, Ramsey offers a bold, no-nonsense approach to money matters, providing not only the how-to but also a grounded and uplifting hope for getting out of debt and achieving total financial health.

Ramsey debunks the many myths of money (exposing the dangers of cash advance, rent-to-own, debt consolidation) and attacks the illusions and downright deceptions of the American dream, which encourages nothing but overspending and massive amounts of debt. "Don't even consider keeping up with the Joneses," Ramsey declares in his typically candid style. "They're broke!"

Be the first to review “The Total Money Makeover: A Proven Plan for Financial Fitness” Cancel reply