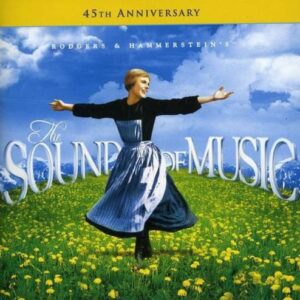 Nominated for ten Academy Awards and winner of five (including Best Picture and Best Director), The Sound of Music was the number one Box Office Champion from 1966 to 1972 it, according to Variety s survey. Today it stands as the most successful movie musical of all time. The movie has also made a successful transition to the small screen, appearing as a perennial favorite on television throughout the world, and has transitioned from home video to laser disc, DVD and Blu-ray.

The motion picture soundtrack, released internationally on the RCA label, has gone gold and platinum and sold well over 10 million units worldwide. To coincide with 20th Century Fox s new Blu-Ray release, Legacy Recordings is offering a new special version of the beloved musical, complete with revised liner notes and brand-new photos. The Sound Of Music 45th Anniversary Edition includes a very special nod to the music s impact and influence on younger generations: My Favorite Things, sung by Lea Michelle of the hit TV show Glee. The song s relevance today in pop culture is a sign of the endearing and lasting achievement of this cinematic and musical touchstone.