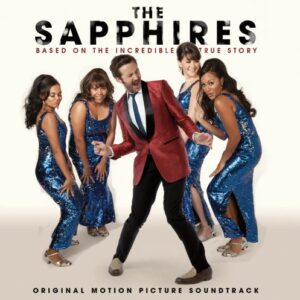 Directed by Wayne Blair and starring Chris O'Dowd, Jessica Mauboy, Deborah Mailman, Shari Sebbens and Miranda Tapsell, The Sapphires is inspired by a true story of four talented singers from a remote Aboriginal mission who are discovered by an unlikely talent scout (O'Dowd). Plucked from obscurity and branded as Australia's answer to The Supremes, The Sapphires grasp the chance of a lifetime when they are offered their first real gig - entertaining the troops in Vietnam. For the girls, a whole new world of sex, war, politics and soul opens before them.

Movie fans will know Chris O'Dowd from his co-starring role in the smash hit Bridesmaids. Jessica Mauboy, who portrays the lead singer of The Sapphires, has sold over 1.7 million units in Australia and has achieved nine Top 20 multiple platinum selling singles in Australia. And most recently Jessica picked up the Best Supporting Actress award for her role in The Sapphires at the 2013 ACCTA Awards (Australia's version of the Oscars).

The Sapphires soundtrack is on the way to double platinum in Australia.

The Sapphires is a triumphant celebration of youth, courage, love, family & soul.

Be the first to review “The Sapphires Original Cast” Cancel reply