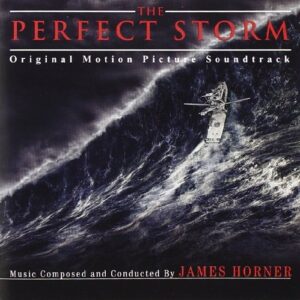 Amazon.com
There's no shortage of irony in film composer James Horner's cinematic triumphs with oceanborne disaster. Titanic, of course, became one of the most mega-successful orchestral soundtracks in history. While The Perfect Storm may not scale those commercial heights, it's a worthy, if differently nuanced, companion piece. With his score revolving around a rolling, six-note motif that perfectly evokes the waves of the North Atlantic, Horner colors the tale of the doomed fishing trawler Andrea Gail and her crew with a dramatic restraint that often brings to mind the best work of John Williams and John Barry. Horner's score builds on a dramatic tension between the brass and the strings (and even an apropos metal-guitar lick or two), before climaxing in a pair of lengthy cue-suites ("Coast Guard Rescues" and "The Rogue Wave") that masterfully conjure menace and pure terror from a skillful alchemy of challenging tonality and orchestral color. And, of course, there's a marketing-driven, tacked-on pop song, "Yours Forever," a collaboration between John Mellencamp and Horner (built around the same six-note motif) that's solid if not spectacular; Mellencamp delivers it well and survives with his dignity intact. --Jerry McCulley