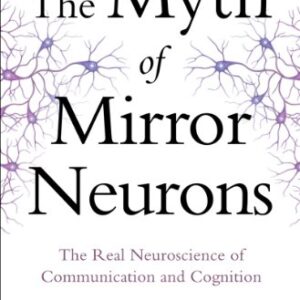 The Myth of Mirror Neurons: The Real Neuroscience of Communication and Cognition

An essential reconsideration of one of the most far-reaching theories in modern neuroscience and psychology.

In 1992, a group of neuroscientists from Parma, Italy, reported a new class of brain cells discovered in the motor cortex of the macaque monkey. These cells, later dubbed mirror neurons, responded equally well during the monkey’s own motor actions, such as grabbing an object, and while the monkey watched someone else perform similar motor actions. Researchers speculated that the neurons allowed the monkey to understand others by simulating their actions in its own brain.

Mirror neurons soon jumped species and took human neuroscience and psychology by storm. In the late 1990s theorists showed how the cells provided an elegantly simple new way to explain the evolution of language, the development of human empathy, and the neural foundation of autism. In the years that followed, a stream of scientific studies implicated mirror neurons in everything from schizophrenia and drug abuse to sexual orientation and contagious yawning.

In The Myth of Mirror Neurons, neuroscientist Gregory Hickok reexamines the mirror neuron story and finds that it is built on a tenuous foundation—a pair of codependent assumptions about mirror neuron activity and human understanding. Drawing on a broad range of observations from work on animal behavior, modern neuroimaging, neurological disorders, and more, Hickok argues that the foundational assumptions fall flat in light of the facts. He then explores alternative explanations of mirror neuron function while illuminating crucial questions about human cognition and brain function: Why do humans imitate so prodigiously? How different are the left and right hemispheres of the brain? Why do we have two visual systems? Do we need to be able to talk to understand speech? What’s going wrong in autism? Can humans read minds?

The Myth of Mirror Neurons not only delivers an instructive tale about the course of scientific progress—from discovery to theory to revision—but also provides deep insights into the organization and function of the human brain and the nature of communication and cognition.

Be the first to review “The Myth of Mirror Neurons: The Real Neuroscience of Communication and Cognition” Cancel reply