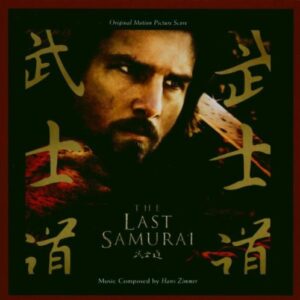 Amazon.com
Whether Tom Cruise's portrayal of a 19th century American soldier cum samurai warrior will be remembered with the same pangs of pop-cultural bemusement that befell John Wayne playing Genghis Khan remains to be seen. But its musical soundtrack does mark an auspicious occasion: pop musician-turned-composer Hans Zimmer's 100th score since beginning his film career in 1988. A pioneer of fusing both the electronic and orchestral and the Westernized with the indigenous, Zimmer does both here with skill, drawing heavily on samples of the traditional Taiko (a massive Japanese drum) for its rhythmic action sequences, while constructing a melodic Western motif for Cruise's character that's both centerpiece and counterpoint for the score's transcultural intent. Aside from the brief, ominous thunder of the expected action/suspense boilerplate, Zimmer has constructed passages of gentle, Asian-inflected pastoralism that have parallels with much of his evocative work on The Thin Red Line. Those cues are the score's very soul, a canvas against which his more traditional themes reverberate all the stronger. --Jerry McCulley

Be the first to review “The Last Samurai” Cancel reply