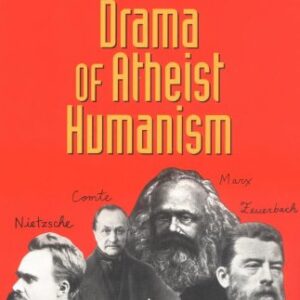 The Drama of Atheist Humanism

Henri de Lubac, S.J. De Lubac traces the origin of 19th century attempts to construct a humanism apart from God, the sources of contemporary atheism which purports to have "moved beyond God." The three persons he focuses on are Feuerbach, who greatly influenced Marx; Nietzsche, who represents nihilism; and Comte, who is the father of all forms of positivism. He then shows that the only one who really responded to this ideology was Dostoevsky, a kind of profit who criticizes in his novels this attempt to have a society without God. Despite their historical and scholarly appearance, de Lubac's work clearly refers to the present. As he investigates the sources of modern atheism, particularly in its claim to have definitely moved beyond the idea of God, he is thinking of an ideology prevalent today in East and West which regards the Christian faith as a completely outdated.

Be the first to review “The Drama of Atheist Humanism” Cancel reply
Digabyss.com
WP-Backgrounds Lite by InoPlugs Web Design and Juwelier Schönmann 1010 Wien