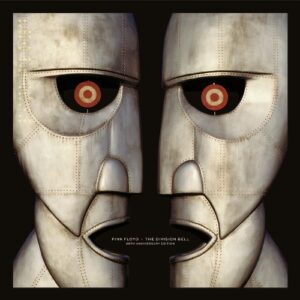 The Division Bell 20th Anniversary collector s box set will feature a new 2-LP vinyl edition of the album, remastered by Doug Sax at The Mastering Lab from the original analogue tapes, including all the full length tracks (originally edited to fit on a single LP) in a gatefold sleeve designed by Hipgnosis/StormStudios. Five other discs are included: a red 7 vinyl replica of single Take It Back, clear 7 vinyl replica of High Hopes, 12 blue vinyl replica of High Hopes with reverse laser etched design, the 2011 Discovery remaster of The Division Bell and a Blu-ray disc including The Division Bell album in HD Audio, plus the previously unreleased 5.1 surround sound audio mix of the album by Andy Jackson.

Another addition included on the Blu-ray disc is a new video for Marooned, the track that won a Grammy for Best Rock Instrumental in 1994. Filmed in Ukraine during the first week of April 2014, the video was directed by Aubrey Powell at Hipgnosis. It will appear on the disc with audio tracks in both PCM Stereo and a 5.1 mix by Andy Jackson.