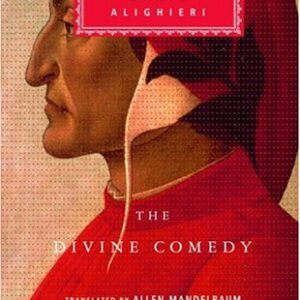 The Divine Comedy, translated by Allen Mandelbaum, begins in a shadowed forest on Good Friday in the year 1300. It proceeds on a journey that, in its intense recreation of the depths and the heights of human experience, has become the key with which Western civilization has sought to unlock the mystery of its own identity.

Mandelbaum’s astonishingly Dantean translation, which captures so much of the life of the original, renders whole for us the masterpiece of that genius whom our greatest poets have recognized as a central model for all poets.

This Everyman’s edition–containing in one volume all three cantos, Inferno, Purgatorio, and Paradiso–includes an introduction by Nobel Prize—winning poet Eugenio Montale, a chronology, notes, and a bibliography. Also included are forty-two drawings selected from Botticelli's marvelous late-fifteenth-century series of illustrations.