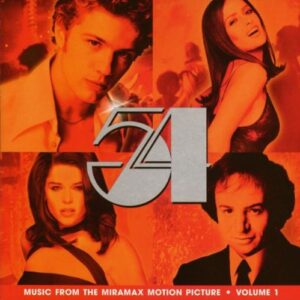 Amazon.com
As if the genre didn't have enough stigmas to transcend, countless nostalgic compilations have done disco additional disservice by reducing the canon to a handful of obvious tunes trotted out endlessly. Fortunately, by including lesser-known gems like the Gibson Brothers' "Que Sera Mi Vida" next to classics by Sylvester, Dan Hartman, and Chic, the music supervisors of 54 have assembled irrefutable proof that the late '70s weren't the musical wasteland those idiots who torched their Donna Summer LPs claimed. However, the producers apparently weren't entirely immune to the commercial leanings that undermined disco via overexposure; program your CD player to skip the annoying cut-and-paste medley "Studio 54" and Mary Griffin's updated "Knock on Wood," which pales next to Amii Stewart's chart-topping 1979 reading. --Kurt B. Reighley

Be the first to review “Studio 54, Vol. 1: Music From The Miramax Motion Picture” Cancel reply