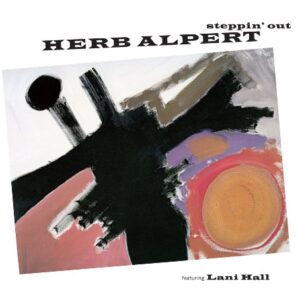 Grammy®-winning jazz great Herb Alpert is Steppin' Out with a new album that combines pop instrumentals and timeless jazz along with Latin-influenced rhythms reminiscent of the Tijuana Brass. Steppin' Out explores standards from the American Songbook as well as Alpert's own catalog, and features his wife, the Grammy®-winning vocalist Lani Hall, on several tracks. Highlights include the single "Puttin' on the Ritz," Art Pepper's "Our Song," Astor Piazolla's "Oblivion," and a trio of Tijuana Brass chestnuts, "Good Morning Mr. Sunshine," "And the Angels Sing," and the 50th Anniversary recording of "The Lonely Bull."

Alpert is one of the founders of A&M Records the most successful independent record label of all time, where he recorded as a solo artist and leader of the Tijuana Brass, selling over 75 million records. Overall, Alpert has scored five #1 Billboard Pop Singles, and won eight GRAMMY's, and received, with his partner, Jerry Moss the GRAMMY Lifetime Achievement Award and The Rock & Roll Hall of Fame Lifetime Achievement Award. In President Obama presented to him a National Medal of Arts Award. In 2013 President Obama awarded him the National Medal of Arts, the highest award given to artists and arts patrons by the United States government.

Be the first to review “Steppin’ Out” Cancel reply