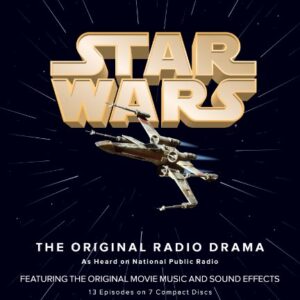 When this series was first broadcast on National Public Radio in 1981, it generated the largest response in the network's history: 50,000 letters and phone calls in a single week, an audience of 750,000 per episode, and a subsequent 40-percent jump in NPR listenership.

This landmark production, perhaps the most ambitious radio project ever attempted, began when Star Wars creator George Lucas donated the story rights to an NPR affiliate. Writer Brian Daley adapted the film's highly visual script to the special demands and unique possibilities of radio, creating a more richly textured tale with greater emphasis on character development. Director John Madden guided a splendid cast—including Mark Hamill and Anthony Daniels, reprising their film roles as Luke Skywalker and the persnickety robot See Threepio—through an intense 10-day dialogue recording session. Then came months of painstaking work for virtuoso sound engineer Tom Voegeli, whose brilliant blending of the actors' voices, the music, and hundreds of sound effects takes this intergalactic adventure into a realm of imagination that is beyond the reach of cinema.

Amazon.com Review
At first glance, it seems difficult to imagine Star Wars presented as a radio serial. Wouldn't the story be weakened by the loss of visuals? This remarkable production, broadcast on National Public Radio in 1981, proves that sounds convey pictures quite well on their own. John Williams's original score and sound effects from the film add drama and depth to the story, and the characters are brought to life by a talented cast including Mark Hamill and Anthony Daniels reprising their roles as Luke Skywalker and C-3PO. Though Brock Peters's Darth Vader is a bit of a disappointment (James Earl Jones left some pretty big boots to fill), Perry King does a fine turn as Han Solo, and Ann Sachs makes a believable Princess Leia. The story itself has been greatly expanded, and listeners are treated to several new scenes, including conversations between Princess Leia and her father on Alderaan and Biggs Darklighter's confession to Luke that he had decided to join the Rebel Alliance after leaving the Imperial Space Academy. Presented in 13 episodes, this excellent radio drama is enjoyable even for those whom audiobooks usually leave cold. As series director John Madden noted during the production, "You may think you've seen the movie; wait till you hear it." (Running time: 6 hours, 6 cassettes) --C.B. Delaney

Be the first to review “Star Wars: The Original Radio Drama” Cancel reply