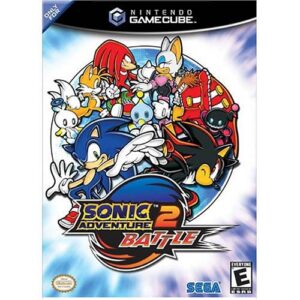 Product Description
Most Sonic the Hedgehog games are specifically for Sega related platforms but Sonic Adventure 2 Battle is an original game made for the Nintendo GameCube. Sonic and crew need to stop Dr. Eggman from his nasty tricks again. There's new characters brought into the Sonic universe! A mysterious dark hedgehog called Shadow and a bat named Rouge. The Sonic Adventure 2 Battle has been enhanced with graphics, doubling the framerate and now is set as a multiplayer system.

Amazon.com
Sega's mascot made his 3-D debut on the Dreamcast, but with the demise of that system the zippy blue hedgehog is popping up everywhere--including on the GameCube. Unfortunately, his first next-gen appearance, Sonic Adventure 2: Battle, is marred by the same 3-D camera problems that plagued the Dreamcast version, and the multiplayer "battle" component isn't all that it's cracked up to be.

Right out of the gate, players have the option of choosing Hero (Sonic, Tails, and Knuckles) or Dark (Dr. Eggman, Shadow, and Rouge) quests, which are completely different. Sonic and his dark counterpart Shadow traverse levels at warp speed colleting coins and power-ups while fighting enemies in the game's most exhilarating moments. Unfortunately, the other characters are nowhere near as fun to play. Dr. Eggman and Tails fight through levels that require little more than constant button-mashing to shoot an endless procession of enemies, and Knuckles and Rouge participate in seemingly endless levels that require searching for a variety of objects.

Graphically, the game is a bit of a letdown considering the processing muscle of GameCube. Models are fairly simplistic, and level textures are sometimes bland. Game Boy Advance owners can use a link cable to download Chao from the game and train them on the go, but the rewards for doing so are minor considering the time investment involved. The main feature this game offers over its Dreamcast predecessor is the variety of multiplayer modes, which are fun but offer none of the depth or replayability of standalone multiplayer games like Super Smash Bros. Melee. Still, they are nice additions--especially the racing games--and round out a flawed single-player component. Sonic addicts who missed this game the first time around on the Dreamcast will definitely want to check it out, but the finicky camera, tedious non-Sonic/Shadow levels in single-player mode, and surprisingly shallow multiplayer components (especially the Chao games) turn what could have been a great game into a mere good one. --T. Byrl Baker