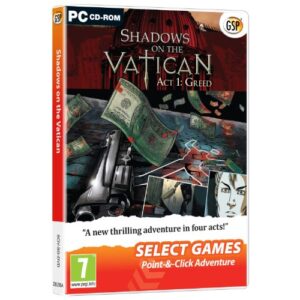 ACT 1: GREED - A thrilling new point-and-click adventure inspired by real events in recent Italian history! A blood red sky surrounds the city of Rome in a surreal never-ending twilight. Under the shadow of St. Peter an American ex-priest investigates a series of events that exposes a deeper, more complex web of political and religious intrigue than he could ever have imagined. Visiting Rome from Chicago, where he works as a doctor, ex-priest James Murphy answers a mysterious call for help from his friend Cristoforo. The disappearance of a briefcase containing compromising documents is enough to convince James that his friend is a victim of something shady and sinister. The Vatican's involvement and some strange parallels with his own traumatic past inspire James to get to the bottom of this mystery. Along this dangerous and disturbing path, James finds the most unlikely travelling companion who will question his deepest beliefs. And so the two characters begin both a physical journey in search of the truth, and a metaphysical exploration of the inner soul and the darkest secrets that everyone hides, even a "champion of the faith" like James. Rome is the stage for this adventure - a city bathed in eternal twilight, its skies tinted the colour of blood spilled in more than thirty years of intrigue: blood of innocents and guilty, unknown and famous victims alike. Game Features: A thrilling new point and click adventure in 4 acts, inspired by real events in recent Italian history Over 10 locations per episode with high-res graphics, directed by Lorenzo Ruggiero (Marvel/DC Comics). Realistic characters with hours of motion-capture animations Well integrated puzzles and several hours gameplay