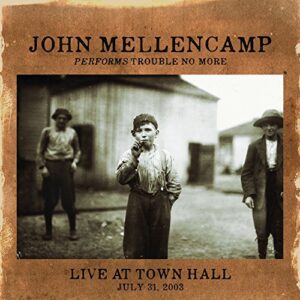 Released in June 2003, John Mellencamp's Trouble No More was received with universal critical acclaim and a No. 1 debut on Billboard's Blues chart. Featuring Mellencamp and his band's spirited take on 11 American folk and blues classics, including Robert Johnson's 'Stones In My Passway,' Son House's 'Death Letter,' Woody Guthrie's 'Johnny Hart,' Willie Dixon's 'Down In The Bottom,' Lucinda Williams' 'Lafayette,' and several others, the album was recorded and mixed in just 17 days, capturing the sessions' bounding energy.

The CD and digital audio packages both feature the complete 15-song concert, while the vinyl LP highlights 10 performances from the show. All three configurations include a new liner notes essay by Bob Merlis.