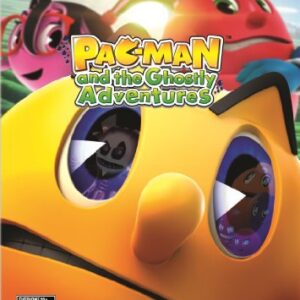 Pac-Man and the Ghostly Adventures – Xbox 360

Pac is back in an all new experience for a whole new generation of fans. Pac Man and the Ghostly Adventures game has an original story that is inspired by the show as well as all the charming characters from the highly anticipated Pac Man and the Ghostly Adventures animated series created and produced by Avi Arad, acclaimed director and founder of Marvel Studios. The story begins as the menacing ghosts escape from the creepy Netherworld to invade PacWorld. These frightening ghosts, ghouls, and goblins wreak havoc on the population and cause nothing but trouble wherever they go. Pac and his pals rise to the challenge of protecting their home and embark on an epic battle. Pac and his 2 best friends, Spiral and Cylindria, rise to the challenge of protecting their home, in a big, bustling, bonkers world of action, adventure, and just plain wackiness. All the while fighting for: Friendship, Freedom and the Future. Pac is Back.