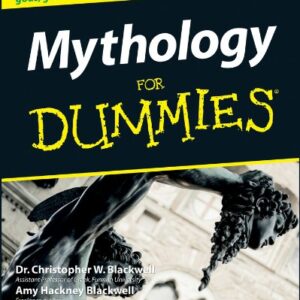 Every culture and time has its myths. You might say that myths help us to understand people, since just like people they can be inspirational and beautiful, as well as cruel and violent. The main players in mythology are the original drama kings and queens — they hang themselves in shame, poke out their own eyes, rule cities, and marry their relatives — and the fun doesn’t stop there! If you want all the scoop on gods and goddesses, fates and furies, monsters and heroes from around the world, Mythology for Dummies is the Who’s Who of mythological figures that you can’t do without.

It’s no secret that mythology can be confusing for anyone. From cultural hero Johnny Appleseed, to manly Odysseus, to femme fatale Aphrodite, and those pesky Cyclops running amuck on that faraway island, Mythology for Dummies covers all the bases, including information on:

Also, this book will get you up to speed on the heavy stuff—like how mythology intersects with our lives, and explores the meaning of existence. Organized into chapters on specific topics, it breaks down the common types of myths and mythological figures, and offers plain-English explanations of how myths have appeared in cultures throughout the ages. You’ll find what you need to know on these topics and many more:

You’ll also enjoy helpful features like charts comparing major figures, and a tear-out tip-sheet with a timeline of world civilizations. Whether you want to dabble in the wonders of mythology or get serious, Mythology for Dummies will demystify the subject, and show you how important myths can be to a culture. You’ll never say, “It’s only a myth” again!

Be the first to review “Mythology For Dummies” Cancel reply