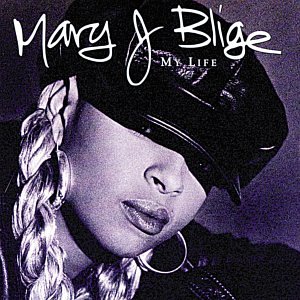 Amazon.com
During one of the "interludes" on My Life, Keith Murray is rapping about "Grab your cranium for my ultimatum," when someone in the studio control booth asks producer Chucky Thompson, "Hey, Chuck, put on some of that smooth [stuff]." Murray disappears; the dreamy synth chords of Blige's title track emerge, and her sultry voice moans with a combination of weary loneliness and unslaked desire. The ballad which follows is "smooth" but never slick, for the singer's sinuous, extended notes confess the blues even as they yearn for something better. It's tempting to see this little scenario--the rapper being turned off in favor of the soul diva--as a repudiation of hip-hop in favor of old-fashioned R&B. An honest listen to this album, however, makes such an interpretation impossible. Blige does no actual rapping herself on her long-awaited second outing, but the sound of "My Life" would have been impossible without hip-hop. The results confirm the promise of Blige's '92 debut; she is the premier soul diva of the hip-hop generation. --Geoffrey Himes

Be the first to review “My Life” Cancel reply