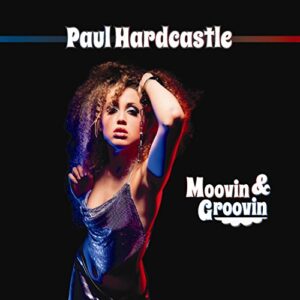 Cutting his musical teeth beginning in the 70's when disco, bell bottoms and Soul Train were king, super producer of sexy and syncopated sides Paul Hardcastle comes out of the woodshed with back to back new projects, the latest in the Jazzmasters series VII and this a dance down memory lane with a 21st century twist.

Moovin And Groovin is a collection of disco infused pieces that recall an era where music was all about getting your 'move on' with Barry White, Donna Summer and
Saturday Night Fever casting their respective spells on the masses. You'll feel instantly transported back in time with this highly infectious romp that brings to bear all of the feeling moods and vibes that made the 70's and 80's what they were, yet all spun with musical yarns of today.

Disco has made a bit of a resurgence since 2013 with disco styled songs released by Daft Punk, Justin Timberlake and Bruno Mars, and now from a name that has been synonymous with disco infused beats.

This is Hardcastle at his absolute best, highly syncopated infectious grooves done in his own inimitable style, one that has earned him a place in musical royalty. For you lovers of his multi genre classic 'Rainforest', M and G is an extension of that classic sound and will be sure to energize his already rabid base and cause a seismic shift in this new century with this nod to the past but his eye solidly on the future. As the title suggests, this set will get you doing just that. Come and get your groove on.

Be the first to review “Moovin & Groovin” Cancel reply