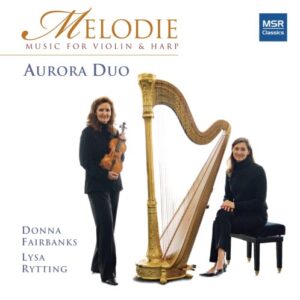 The most fundamental essence of music, melody, answers our instinctual longing for beauty in sound. Melody swells from a creative outlet that seems vital to our existence. We are drawn to its inspirational force and its capacity to stir an endless variety of emotions. Melody can be simple and serene, or imaginative and playful. It can be triumphal or mournful, primitive or sophisticated, impassioned or carefree. What better way to celebrate melody than with the glorious combination of violin and harp? While the violin swells with warm and vibrating sound, the harp, an instrument with an ancient past, produces tones that are near mystical in their beauty. Together, the instruments blend to create music with an otherworldly quality.

This album features music by fifteen composers from varying time periods, nationalities and styles. The melodies written by 18th-century composers Gluck, Mozart and Scarlatti are inherently elegant, with graceful symmetry and beautifully-tailored harmonies. French composers Debussy, Saint-Saëns, Lauber, Ibert, Sagnier and Inghebrecht used melody to conjure images and emotions. Debussy, the master of mood and color, wrote melodies that weave through the music as effortlessly as a brush stroke across a canvas. In The Little Shepherd, Debussy paints a pastoral scene of idyllic simplicity and innocence. Saint-Saëns The Swan portrays the majestic beauty of the swan in the soaring melody, and the watery waves in the undulating accompaniment. All the color and romance of an antiquated French festival is captured in 4 Danses Médiévales by Lauber, and the exotic flavor and bravura of a Spanish flamenco dance is recreated in Ibert s Entr acte. Vivid imagery continues with The Black Swan by Brazilian composer Villa- Lobos, where the swan is visualized through the lens of dark romanticism. The entire violin melody is held captive on the low G string, and the wave-like harp accompaniment shimmers with intensity. The magic of dreams, mist and twilight are brought to life in Padovano s Berceuse and Nielsen s The Fog is Lifting. And, true to its title, Intermezzo by Icelandic composer Sveinsson has all the trimmings of a brief drama inserted between scenes of a play. Splendid craftsmanship of melody is evident in the premiere recordings of pieces by American composers Hatten and Boren. Sonatine in C minor by Hatten has two alternating melodies, one punctuated by quickly changing meters and fast passagework, and a second that flows with lovely poignancy. Movements from the Liturgical Dance Nos.35-37 by Boren is a work commissioned by the Aurora Duo.

Formed in 1991, the AURORA DUO consists of violinist Donna Fairbanks and harpist Lysa Rytting. With a repertoire that covers a wide variety of styles, they honor the established masterpieces of the genre while also committing to the performance of new and rarely heard pieces.

American violinist Donna Fairbanks has performed as soloist with numerous orchestras including the Charleston Symphony Orchestra, the Utah Symphony Orchestra, the Orquestra Sinfonica de Londrina in Brazil and Sun Valley s Elkhorn Festival Orchestra. She has performed solo recitals throughout the United States, and in Mexico and Brazil. Ms. Fairbanks received a Doctor of Musical Arts in Violin Performance from the University of Arizona and a Master of Music degree from the Eastman School of Music in Rochester, New York.

American harpist Lysa Rytting received a Premier Prix in harp performance from the Royal Conservatory of Brussels in Belgium, where she studied with Susanna Mildonian. Other teachers include Marylin Costello, former principal harpist of The Philadelphia Orchestra; Eileen Malone of the Eastman School of Music; and Louise Pratt and Rosalie Pratt at Brigham Young University in Utah.

Be the first to review “Melodie: Music for Violin and Harp – Aurora Duo” Cancel reply