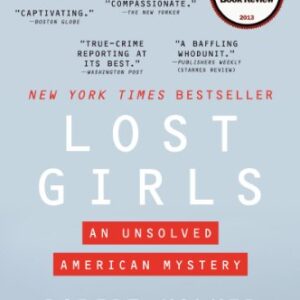 Award-winning investigative reporter Robert Kolker delivers a humanizing account of the true-life search for a serial killer still at large on Long Island, and presents the first detailed look at the shadow world of online escorts, where making a living is easier than ever and the dangers remain all too real. A triumph of reporting, a riveting narrative, and "a lashing critique of how society and the police let five young women down" (Dwight Garner, New York Times), Lost Girls is a portrait of unsolved murders in an idyllic part of America, of the underside of the Internet, and of the secrets we keep without admitting to ourselves that we keep them.

Amazon.com Review
An Amazon Best Book of the Month, July 2013: As you might expect from the story of a serial killer who preys on prostitutes, the young women in Robert Kolker’s enthralling Lost Girls were already, in many ways, lost. Prostitutes and runaways, their murders might have easily elicited a what-did-they-expect shrug. (Certainly that’s how the police at times seemed to handle the case). What sets Lost Girls apart is Kolker’s empathetic and detailed portrayals of the victims, based on hundreds of hours of interviews with their families and friends. This is an impressive and impassioned work of investigative journalism, and a chilling commentary on the entangled influences of economics, race, technology and politics on sex and murder in the Internet age. Kolker, a reporter for New York magazine, is that rare-breed journalist who latched onto a difficult story and refused to let go. In this haunting tale, he bravely and meticulously recreates the lives of once hopeful but sadly forgotten young women, while shining a light on the economic hardships that pushed them to make tough, risky choices. A colleague told me that after finishing Lost Girls she spent hours researching the victims and the case online. Her warning to me is my promise to you: Be prepared to obsess. --Neal Thompson

Be the first to review “Lost Girls: An Unsolved American Mystery” Cancel reply