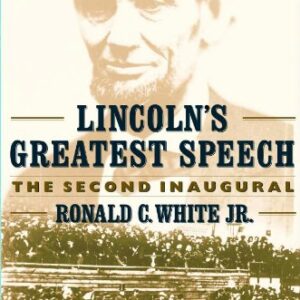 Product Description
As the day for Lincoln's second inauguration drew near, Americans wondered what their sixteenth president would say about the Civil War. Would Lincoln guide the nation toward "Reconstruction"? What about the slaves? They had been emancipated, but what about the matter of suffrage? When Lincoln finally stood before his fellow countrymen on March 4, 1865, and had only 703 words to share, the American public was stunned. The President had not offered the North a victory speech, nor did he excoriate the South for the sin of slavery. Instead, he called the whole country guilty of the sin and pleaded for reconciliation and unity.

In this compelling account, noted historian Ronald C. White Jr. shows how Lincoln's speech was initially greeted with confusion and hostility by many in the Union; commended by the legions of African Americans in attendance, abolitionist leader Frederick Douglass among them; and ultimately appropriated by his assassin John Wilkes Booth forty-one days later.

Filled with all the facts and factors surrounding the Second Inaugural, Lincoln's Greatest Speech is both an important historical document and a thoughtful analysis of Lincoln's moral and rhetorical genius.

Amazon.com Review
In the tradition of Garry Wills's modern classic Lincoln at Gettysburg, Ronald C. White Jr. offers a close reading of the speech Abraham Lincoln gave in 1865 at his second inauguration and declares it the man's finest and most important effort. It contains one of Lincoln's best-known lines ("With malice toward none; with charity for all"), which White admires as "a timeless promise of reconciliation." At the same time, White reminds readers that rather than yanking such brilliant rhetorical nuggets from their context, "We need to understand Lincoln's strategy for the complete speech." He provides this in some detail, describing the political environment in which Lincoln found himself, having recently won a presidential election that he nearly lost and also seeing the Confederacy begin to collapse for good. It was not a long speech, containing only 701 words of mostly one syllable each and requiring merely six or seven minutes to deliver, compared to about 35 minutes for the inaugural address he had given four years earlier. White calls these words Lincoln's "last will and testament to America." John Wilkes Booth, who attended the inaugural ceremony, would murder him the next month. Lincoln buffs in particular will appreciate this book, as will fans of Jay Winik's April 1865. --John Miller