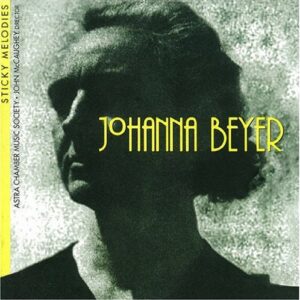 Johanna Magdalena Beyer (1888 1944) was born in Leipzig and moved to the United States sometime around 1924. After studying at various schools in New York, and with composers including Dane Rudhyar, Charles Seeger, Henry Cowell and Ruth Crawford, she began a highly productive and interesting period of composition which lasted from around 1932 to almost 1940. During her life Beyer's music received very few performances and her work was almost completely overlooked for about fifty years after her death. Even with the tremendous renaissance of interest in the works of historical women composers in the United States, Beyer's work has, until now, been (in her own words) in "total eclipse." Beyer is one of the pioneering figures of the experimental strain in contemporary American music. Her work has long lain undiscovered and unperformed because of the lack of adequate performing editions. However, many of her works are now available, making it possible for her music to finally be introduced to the public more than a half-century after it was composed. This double-CD set, featuring world premiere recordings of all the works, is the first ever devoted entirely to Beyer's music.