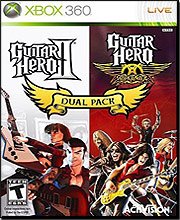 You get both games in one package at a great combined price. Guitar Hero II arrives on the Xbox 360 with a new track list with more than 55 songs, new venues and additional play modes. RedOctane's follow-up to the critically acclaimed rhythm game. Guitar Hero II features a brand-new and expanded track list, more venues and new play modes, and aims to rock longer and harder than its predecessor. The game's all-important track list encompasses all forms of rock and metal music including classic rock, "hair metal," heavy metal, modern rock and alternative rock. In total, Guitar Hero II features more than 55 songs. New modes include a multiplayer co-op mode where players can play not only the lead guitar track, but rhythm or bass as well, allowing players to take on two different sections of the song simultaneously. Supports the Guitar Hero SG controller. Guitar Hero: Aerosmith features tracks from the legendary rock band, as well as songs by those who have played with or inspired them. Unleash your inner rock star, the Aerosmith way. Guitar Hero Aerosmith will let gamers rise to rock royalty and become the "Bad Boys of Boston" themselves. Light up the stage and jam with more than 40 of the best rock tracks of all time, including Aerosmith's greatest hits and chart-topping singles from some of the world's best bands. Play as virtual versions of Joe Perry(guitar), Brad Whitford (guitar), Tom Hamilton (bass), Steven Tyler (vocals) or drummer Joey Kramer and experience Aerosmith's rise to fame through venues from historical moments during the band's illustrious career. Perform songs from musical legends such as Lenny Kravitz, Run-DMC and Stone Temple Pilots. Rock out offline or shred with friends via the Internet. Stand-alone game does not require the original Guitar Hero III game to play.