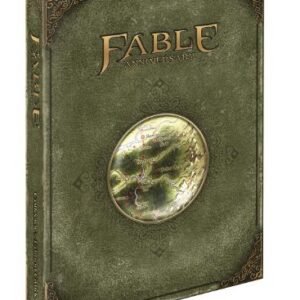 • Limited hardcover edition with special foil treatments and gilded pages based on the in-game book.
• Bonus eGuide and content accessible through Xbox SmartGlass™
• FREE in-game exclusive weapon, ‘The Sword of Strategia’, so you can truly feel like a Hero.

• A Complete Strategy Guide with Secrets Revealed - Incredibly detailed maps with Silver Keys, treasure chests, Demons Doors, and points of interest revealed.
• The Making of a Hero - An in-depth look at the creation of one of gaming's greatest franchises, featuring interviews with members of the original Fable team.
• From Sketch to Screen - A fascinating look at the art of Fable, tracing the evolution of Albion, its inhabitants, its creatures and its Heroes from early concepts to final design.
• Fable's Untold Tales - A tantalising glimpse at some of the stories, creatures and places developed for Fable but lost in the annals of time, featuring never-before-seen artwork and recollections from members of the Fable team.
• Experience a Classic - A wonderful re-telling, exploration, and strategies of an instant classic.
• A Complete Masterpiece – A must-have for Fable fans and collectors to proudly display.