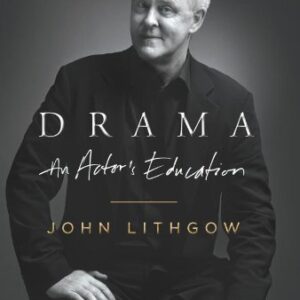 In this riveting and surprising personal history, John Lithgow shares a backstage view of his own struggle, crisis, and discovery, revealing the early life and career that took place out of the public eye and before he became a nationally known star.

Above all, Lithgow’s memoir is a tribute to his most important influence: his father, Arthur Lithgow, who, as an actor, director, producer, and great lover of Shakespeare, brought theater to John’s boyhood. From bedtime stories to Arthur’s illustrious productions, performance and storytelling were constant and cherished parts of family life. Drama tells of the Lithgows’ countless moves between Arthur’s gigs—John attended eight secondary schools before flourishing onstage at Harvard—and details with poignancy and sharp recollection the moments that introduced a budding young actor to the undeniable power of theater.

Before Lithgow gained fame with the film The World According to Garp and the television show 3rd Rock from the Sun, his early years were full of scenes both hilarious and bittersweet. A shrewd acting performance saved him from duty in Vietnam. His involvement with a Broadway costar brought an end to his early first marriage. The theater worlds of New York and London come alive as Lithgow relives his collaborations with renowned performers and directors, including Mike Nichols, Bob Fosse, Liv Ullmann, and Meryl Streep. His ruminations on the nature of theater, film acting, and storytelling cut to the heart of why actors are driven to perform, and why people are driven to watch them do it.

Lithgow’s memory is clear and his wit sharp, and much of the humor that runs throughout Drama comes at his own expense. But he also chronicles the harrowing moments of his past, reflecting with moving candor on friends made and lost, mistakes large and small, and the powerful love of a father who set him on the road to a life onstage.

Illuminating, funny, affecting, and thoroughly engrossing, Drama raises the curtain on the making of one of our most beloved actors.

A Q&A with John Lithgow on Drama

Q: Why did you call the book Drama?

Lithgow: The book is full of drama, both onstage and off. I’m an actor. I’m in the drama business. So in plotting the book, I decided to tell stories of my younger years and turn my own life into drama. What these stories have in common is that they were all formative moments, leading me to become the actor that I am today. Hence the subtitle: an actor’s education.

Q: Early in the book you write, “acting is nothing more than storytelling.” How do the two compare?

Lithgow: An actor is a storyteller all right, but he only plays a part. He is a single character in a larger drama, like an essential cog in a complex machine. A storyteller is in charge of the whole event – like a playwright. Where would an actor be without a play?

Q: In Drama, you admit that in your youth, you “had no intention of being an actor.” All these years later, could you imagine any other life?

Lithgow: No, I’ve long ago embraced my destiny as an actor. My great lost ambition was to be a painter, and I suppose I could have been a good one. But early on, acting won out.

Q: While it offers an inside glimpse of your life and career, Drama is also a tribute to your father. Tell us a little about the man readers will meet in the pages of the memoir. What was the most important lesson you learned from him?

Lithgow: My father was a pioneer in the American regional theater movement and remains one of the very few Americans to produce every single one of Shakespeare’s plays. He was a delightful, creative, and complicated man. He headed up our family of six, and because of his quixotic ventures, we led a gypsy-like existence while I was growing up, moving about ten times. What important lessons did I learn from him? Far more than I can list here. You could fill a book with them. And I did.

Q: What do you consider to be your biggest successes, both professionally and personally?

Lithgow: My biggest professional success? That’s a hard one. I guess the simplest answer is achieving a career where I can move easily between movies, television, and the stage, and from comedy to tragedy to horror. As for my biggest personal success, it’s my family and sporadically achieving the elusive goal of a happy life.

Q: Could you ever see yourself scaling back your stage and screen career and becoming a teacher like your father, inspiring a new generation of aspiring actors?

Lithgow: Not really. I remain too busy acting and too full of self-doubt to present myself as an expert on anything. If I aspire to anything as a teacher, it would be to teach by example.

Lithgow: We actors (and anyone else for that matter) learn much more about ourselves from failure than from success. Indeed, success in my business can be a source of egregious self-importance, self-delusion, and sometimes self-destructiveness. Succeed by all means, but remember your failures.

Q: What would you like readers to take away from reading Drama?

Lithgow: I hope that readers will find my memoir to be surprising and entertaining, and find the people and events in my life as fascinating as I find them. But I also hope that the book provokes some thought about this curious business I’m in. Why are actors driven to act? Why does everyone want to gather round and watch? What is this strange transaction between the entertainer and the entertained? And why can none of us do without it?

A Look Inside Drama
Click on the images below to open larger versions.

Be the first to review “Drama: An Actor’s Education” Cancel reply